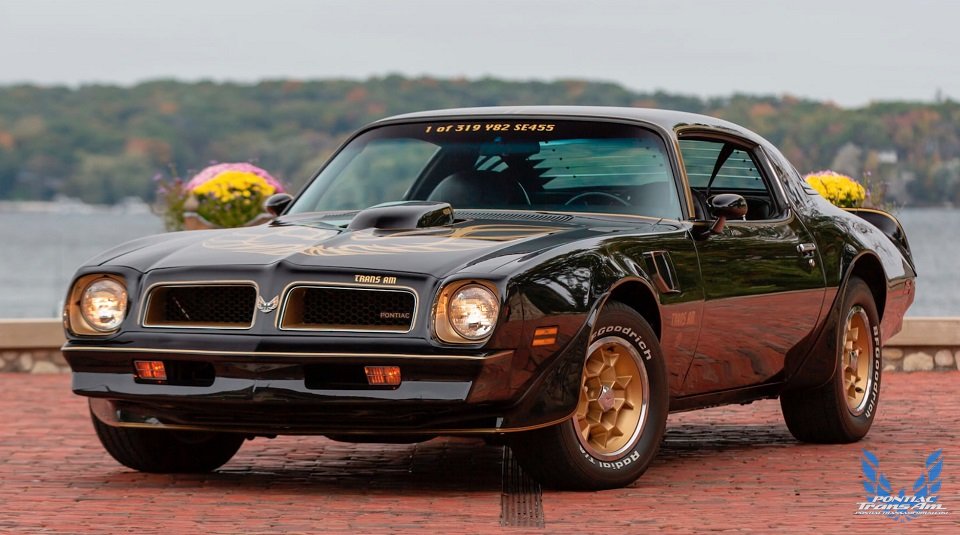 The turning point for the late 1970's Trans Am's occurred in 1976. The corporate bean pontiac.com counters had all but given up on killing off the T/A, especially when they saw the enormous profit the model was bringing in. Gradually, nearly as many Trans Am's left the assembly line as the other Firebirds...combined.

For starters, the T/A got a more integrated front end appearance, enhancing the visual appeal. The new front end returned the parking lamps below the front bumper, each within a narrow cooling slot. Unfortunately, the front spoiler was trimmed back again, leaving it to merely be a keepsake from the glory days of old. The color keyed front bumper, covered in deformable urethane, replaced the rubber covered steel unit of the previous year. The bumper smoothly integrated into the front header panel which was still comprised of fibreglass. Round headlamps made their last second generation appearance on the 1976 edition.

To the rear of the car, the styling pattern which influenced the front was copied. The rear bumper was also covered in a soft urethane with a depression in the center, eliminating the false bumper bar. This theme made the Trans Am a much more complete looking car. The tail lamps were still of body color and stretched from the corner of the rear end to the license plate recess. 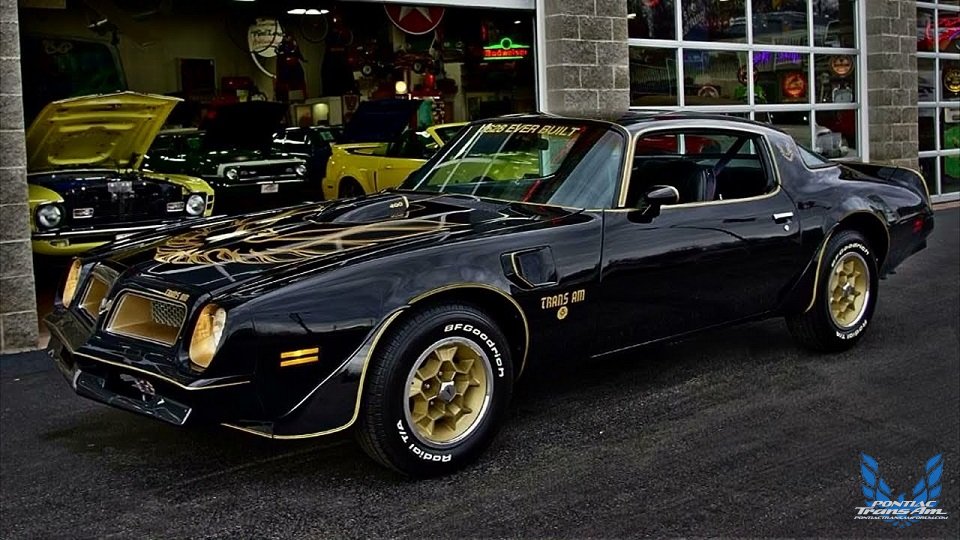 Inside the wide doors, a new interior greeted the owner. The seats were a bit more contoured, with richer materials. Vertical ribbing replaced the horizontal sew lines of the 1971 thru 75 seats. The seats also were thicker appearing, with additional padding. Buckskin replaced saddle and just as burgundy was given up for firethorn, GM's new "wonder color". The material for the base vinyl seats was of Oxen vinyl while custom trim ordered up Tetra vinyl. Again, no cloth trim was offered.

At 185 hp, the 400 was still the base motor and relatively unchanged from the 1975 edition. The engine coded WU when ordered with a manual or YS, Y9 or YZ for Federal cars or ZK if California bound when assigned to the automatic,

Returning for what was to be it's final season (again?) was the optional 455 V8, still labeled in H.O. guise. As with the 400, the specs were virtually interchangeable with the 1975 edition. Once again the 455 was packaged, including the confidence inducing semi-metallic front brake pads. As a 4-speed manual was still the required transmission with the big motor, California cars were not allowed this combination (nor any other 4-speeds, for that matter). The single exhaust system was unchanged from 1975 and exited through dual tail pipes with chrome splitters.

The shaker hood scoop, while still no longer functional would make it's last appearance as the original rounded design. The pronounced intake lip of the shaker would be less so in the model years's to follow. 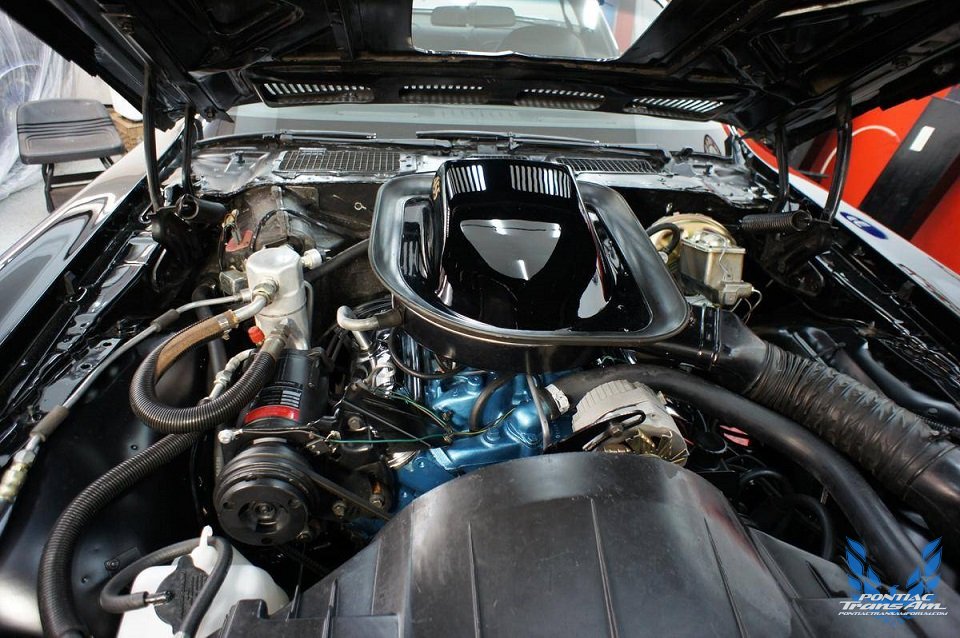 All Trans Am's were still fitted with the GR70x15 steel belted radial ply tires. The tires were still offered in black wall or raised white letters for appearance sake. Rally II wheels, body colored (or argent) with bright spoke accents and trim rings were standard. The honey comb wheels common to most Trans Ams were a no cost upgrade. As with the shaker hood scoop design, these wheels would be offered no longer after 1976

Black was finally offered on a T/A this year, but only about 2590 of them. The Y82/Y84 Special Edition's made their debut as a limited run of Pontiac Motor Division 50th anniversary package cars. The Starlite black exterior was highlighted in gold with pin stripes, starting at the front bumper, wrapping around the body via the wheel openings, finishing it's journey at the rear bumper. Completing the gold exterior accents were a specific hood bird decal, headlamp bezels, grilles, fascia mounted Firebird crest, and honey comb wheels. A small portion of the cars also received black chrome splitter tail pipes. Inside, a gold finished engine turned instrument panel applique replaced the silver tone of other T/A's and the black spokes in the Formula steering wheel were supplanted by a gold version. Either the 400 automatic or 455 manual combinations could be ordered. 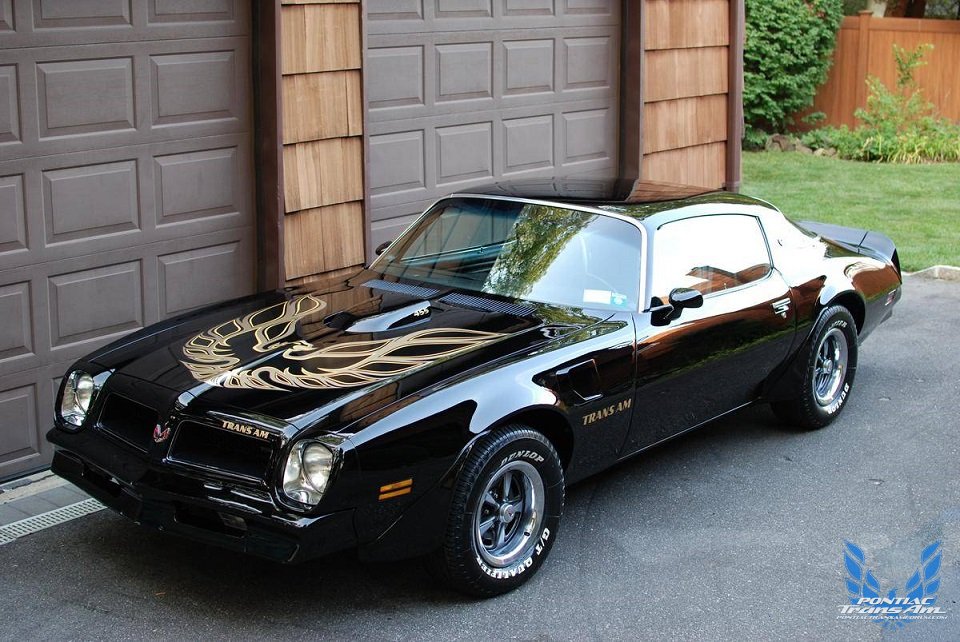 It was on this special T/A that an option would be introduced that would literally open up an entire market - the T-Top. Originally slated to be fitted to all anniversary edition cars, only 643 were actually produced with the tops. The tops, manufactured for Pontiac by Hurst, were known as Hurst Hatches and were fitted after assembly. Of the 643 KwikSpecs 50th anniversary models with Hurst Hatches, 110 were built with the 455/4-speed combination, while 319 455's had the 50th package without the tops. The 400 cars featured 533 with t-tops, and 1628 without.

Sterling silver and Cameo white were the only colors to return to the 1976 line-up. In addition to Starlite Black, Goldenrod yellow, and a pair of much different reds- Carousel and Firethorn were added to the line up. Although Firethorn red was a must have on the rest of the GM offerings, it looked somewhat out of place on the Trans Am.

The September 1975 issue of Road Test magazine (which unfortunately went out of circulation 1981), featured a silver 1976 Trans Am on the cover. Highlighting the cover was an appropriate sell job: "The King is back! First '76 Test: Firebird Trans Am 455 HO. In this issue, the 455 T/A is objectively examined and exposed, being touted "It is the fastest accelerating and best-cornering American car you can buy".This was a very strong statement indeed, but remember, the vaunted Corvette could only hand off 210 hp while the only producing 255 lb/ft of torque in the L82 version.

In search of the fastest American car (guess what was on the cover, again ), the April 1976 issue of Car & Driver discovered accelerating from 0-60 took 7.0 seconds, while an additional 8.6 seconds were needed to produce a speed of 90.3 mph in completing the quarter mile. Winding the big inch engine to 4850 rpm, 350 rpm beyond the maximum recommended engine speed, gear produced a top speed of 118 mph in fourth gear. In 1976 these were big numbers, however, our beloved bird did not fare so well. The Corvette was .3 seconds quicker in the 1/4-mile time and went 6.5 mph faster on the top end, benefiting from less frontal area. The worst news of the article was a bias-ply tired 360 cubic inch Dodge Dart didn't quit going any faster until it's 220 horsepower propelled it to nearly 122 mph. 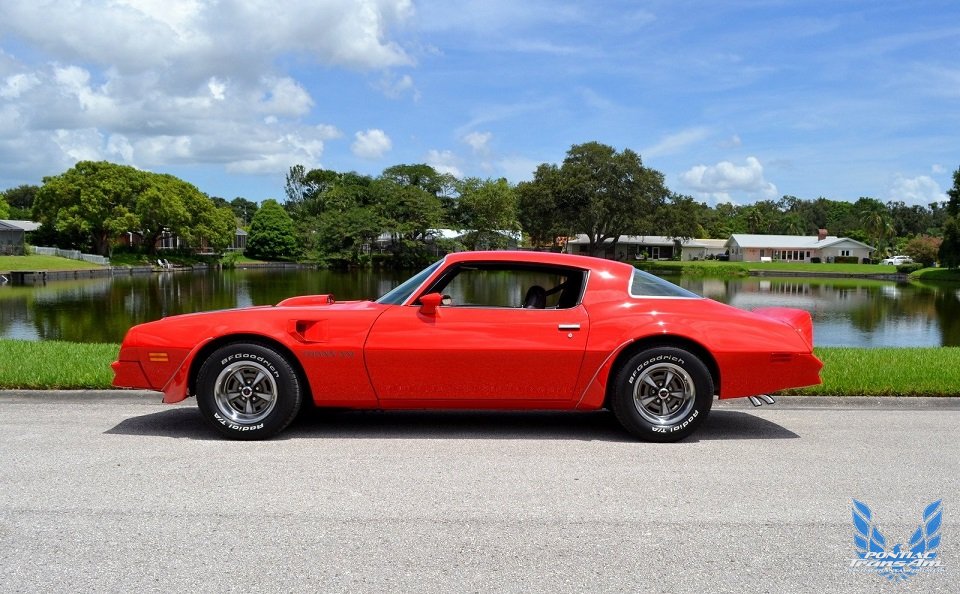 The good news of the article featured the excellent brakes of the T/A. In stops from 70 miles per hour, the front disc/rear drum 3820-lb Trans Am stopped 20 feet shorter than the all-disc brake equipped 3655-pound Corvette. Twenty feet may not seem much, but in life it is the difference between wheeew, made it! and aww-&$%#. From a standing start the Corvette also needed 1-tenth of a second longer to meet the sixty mile per hour mark.

The Trans Am was definitely the rage in 1976. It was the car to have. So popular was the T/A in fact, 46,701 were built as 1976 model year. This accounted for forty-two percent of Firebird production. Why was the car so popular? As more and more people became fed up with sluggish cars, (heck the gas was flowing again!) the Trans Am was the last resource of performance. The $4987.00 base price still delivered the buyer a lot of bang for the buck. Double digit percentage price increases hadn't yet been tacked on by Pontiac, so the car entered '76 only $247.00 higher than in 1976. But the popularity was just beginning as 1977 was about to make all the Burt Reynolds wanna be's noticed, as a "bandit" was about to be unmasked.

AWESOME.
Expand Signature
This T/A WS6 is Factory modified by ASC at the Lachine facility on March 13, 1998 and is
identified/certified to be ASC build #206.
We took delivery from our Pontiac dealer April 7th, 1998.
ASC Factory letter provided from the good people at ASC.
Reactions: Knightrider189
You must log in or register to reply here.