You are using an out of date browser. It may not display this or other websites correctly.
You should upgrade or use an alternative browser.
Forums New posts

A soldier owned it and he was killed in action, and his grandparents kept it in a barn but they died.

It sat for years until a distant relative who inherited the property came to the state to check the house out, leaving the barn open.

The car was seen from the street and a guy walked up to the property caretaker and asked if it was for sale, and he offered $2,000.

There were no papers with it, and the caretaker called the relative, asked if he could buy it for $1,000, and said yes.

He resold it for $4000 to another guy who also couldn't get papers on it.

Oregon doesn't allow a nonpaperwork car to be registered just based on a bill of sale from just anyone.

He put it in Craigs for $6,000, telling me he only had a bill of sale but he checked and title could be had, and that was a lie. I forked out the cash and tried to title it.

To my horror, I found it couldn't be.

After days of feeling screwed, I found a company in Texas that knew of one eastern state that allows bill of sale only if notarized.

The charge was $525 for new plates from that state and registration to be transferred to my state!

I held my breath and sent the $525, but took 3 months and the plates came!

I still have not started it!

I was holding my breath again.

It sat for at least 14 years so all fluids have to come out. 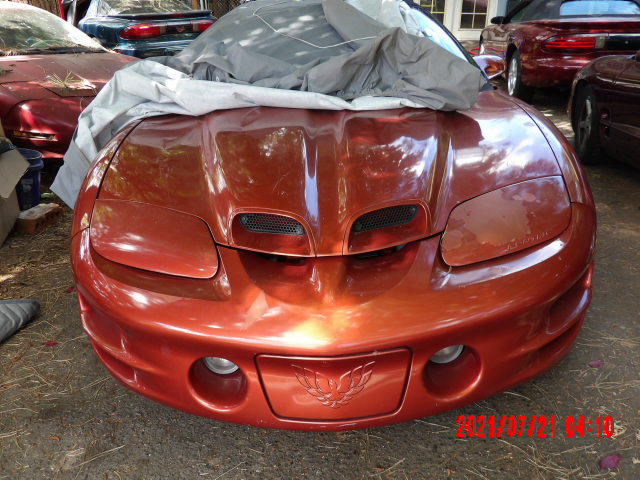 Last edited by a moderator: Nov 23, 2021
Reactions: Pontiac Trans Am

What does it all need?

Thank you,
PTA Staff
Expand Signature
Snowman, you got your ears on?​

As far as I know, a few tiny body work spots. It turns over but wont fire---but I didnt wanna force that with 14 year old oil etc. Dont hear the fuel pump buzz w key on though. Black leather interior is perfect. Top is in great shape for never being cared for. Has extensive old school looking frame rails attached all over the place and a LS1 company exhaust system worth $1,000. Has almost PERFECT WS6 9 inch wheels. May have aftermarket lower a arms---they look massive.So if it fires up ok and runs well, it will just cost what it takes to drop the gas tank, clean it, maybe fuel pump and change all the fluids. In the background you can see some of my other birds. I ve 2002 WS6 vert. 2002 3.8 vert. 2001 3.8 vert, 2005 3.6 vert, 1997 ttop, 1996 hard top, and an almot full of bird parts 28ft semi dry van in my back yard. Been gleaning junk yards for 3 years.
Reactions: Pontiac Trans Am

Change all the fluids first and get that fuel out of the tank cause it will be like molasses.

Thank you,
PTA Staff
Expand Signature
Snowman, you got your ears on?​

Change all the fluids first and get that fuel out of the tank cause it will be like molasses.

I'm worried that it will have candied up in the lines and up into the intake etc.
You must log in or register to reply here.