Burt Reynolds Trans Am for Sale 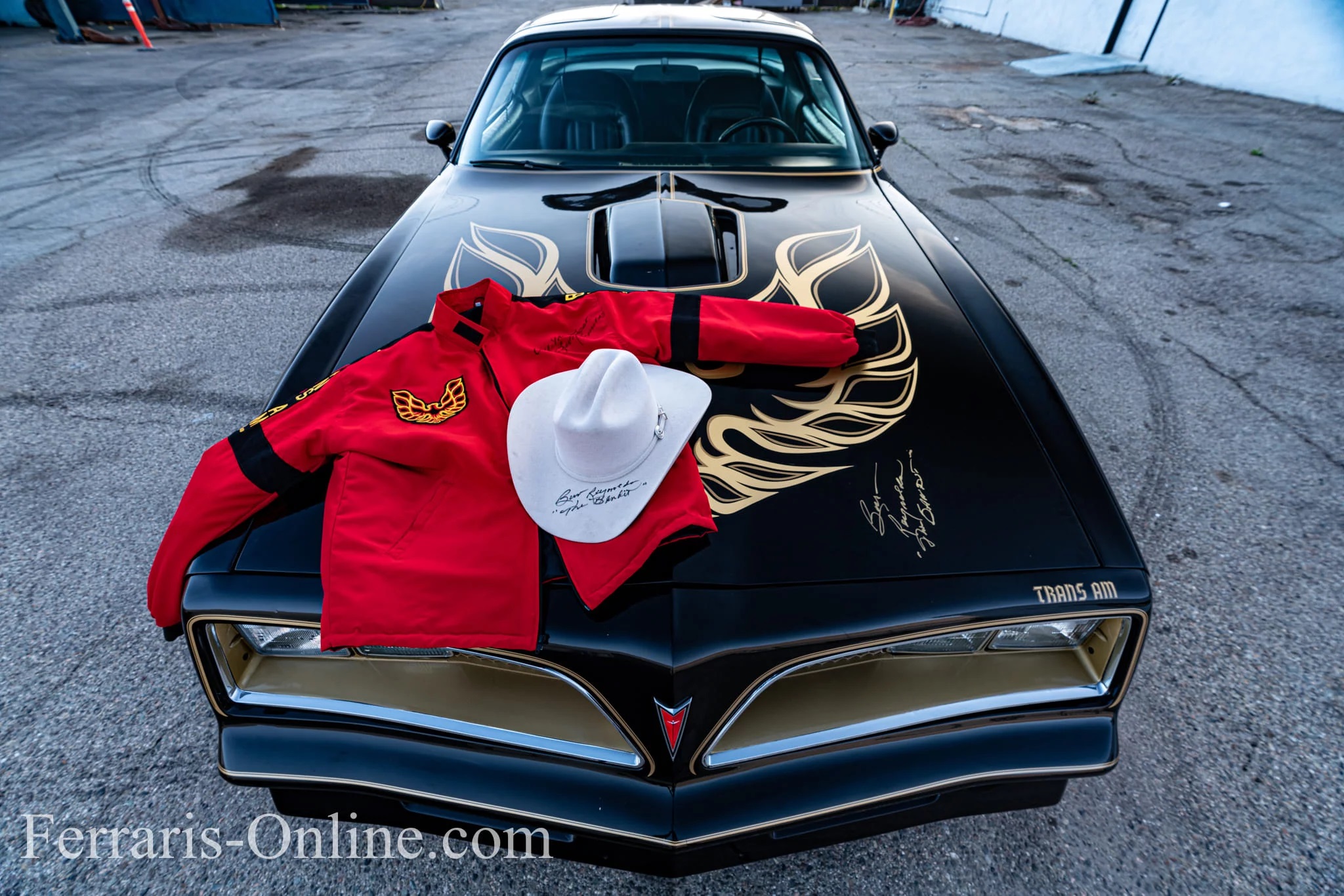 We are pleased to offer 1977 Pontiac Trans-Am s/n 71427, a “Smokey and the Bandit” Trans-Ams once owned by Burt Reynolds. Like the three cars used for the movie (all were destroyed), it is a correct Y82 Special Edition model in black with Hurst T-Tops, a black interior, and a tire-shredding 6.6-liter engine. Any car enthusiasts are familiar with the “Smokey and the Bandit” movie, which combines the fun of watching high-speed car chases with the comedic appeal of Burt Reynolds, as the driver; Sally Fields as the run-away bride; Jerry Reed as the semi-truck driver; Jackie Gleeson as Buford T. Justice, the bumbling Texas lawman; and Mike Henry as Buford’s dim-witted son, Junior, as the jilted Bridegroom. In the movie, Wealthy Texan Big Enos Burdette and his son Little Enos offer $80,000 to bootleg 400 cases of Coors Beer from Texarkana, Texas to Atlanta in 28 hours. Burt “The Bandit” Reynolds takes the bet and with his partner Cledus “Snowman” Snow driving the beer-filled truck, they outwit and outdrive Buford T. Justice and a host of other lawmen. Thanks to movies such as Deliverance, The Longest Yard, the Best Little Whorehouse in Texas and dozens more, Burt Reynolds was, at that time in his career, voted the world’s number one movie box office star for five consecutive years, from 1978 to 1982. Smokey and the Bandit only added to his extensive resume.

It took a pretty stunning car to steal the show from a lineup of Burt Reynolds, Jackie Gleason, Sally Field, and Jerry Reed, but director Hal Needham found one that was up to the task. Just as “Bullitt” and “Gone in 60 Seconds” will forever be linked with their star cars, so will the 1977 Pontiac Special Edition Trans Am be forever linked with Smokey and the Bandit, so much so, in fact, thanks to its “Screaming Chicken” hood decal and the 6.6-liter V8s ungodly amount of torque, they are simply known as the Bandit Trans Am. Gold trim was seemingly everywhere on the car and teamed with the black on black paint, the car was truly a head-turner. The interior featured a gold Formula steering wheel with gold spokes. The instrument panel bezel, the console trim plate, and the inner door panels were trimmed in a gold faux engine-turned geometric pattern. A nicely integrated lower-front chin spoiler trimmed in gold, mildly flared front and rear fenders, also trimmed in gold, and a Duck-tail rear spoiler which is, needless to say, also trimmed in gold added to the image. Pontiac’s unique “Shaker” hood scoop, which brought cooler outside air directly into the engine, was added for a high speed by a ‘ram air’ effect, delivering high-pressure air to the engine.

Pontiac had supplied four new Trans-Ams for the movie, but by the time the final scenes were shot they had wiped out three Trans-Ams and the surviving fourth wouldn’t start or run after all of the stunts and crashes, so a push-car was used to push the last remaining Trans-Am into the scene. Because the cars were all heavily damaged in the movie, the Studio insisted that they were all destroyed for liability reasons. Our feature car, Pontiac Trans-Am s/n 71427, was restored by Harold Murphy, owner of Murphy Auto Body and Restoration of West Palm Beach, and registered to Burt Reynolds with Harold as the Lienholder. Harold has restored many of Burt’s vehicles in the past, including painting his Cessna 421 airplane in red, as Reynolds and Murphy have been friends for over 35 years.

The Pontiac Trans-Am was one of the last of Detroit’s affordable, compact, highly styled and powerful “Pony cars” meant to appeal to younger buyers, thanks to a long hood, a short decklid, a wide range of options to individualize each car, a big cubic inch V8 and rear-wheel drive. Pony cars’ generated brand loyalty, particularly among the crucial Baby-Boomer youth market. During a decade when Detroit had to deal with complex new federal and state smog and safety rules, which caused sagging horsepower and little that was exciting when it came to new cars, the Pontiac Trans-Am Y82 Special Edition in black-on-black with its “Screaming Chicken” hood decal, gold accents and decals and gold snowflake wheels epitomized the styling excess and indulgence that earmarked the late 1970s, and so was a major marketing success, while proving that Detroit still built a few performance cars. And of course, the movie didn’t hurt.

Thanks to the extensive work by Murphy Auto Body and Restoration of West Palm Beach, the body panel fit is excellent, by the standards of a 1970s GM car, and the paint is dent-free, chip-free and is exceptionally nice. All the decals and striping are “as-new”. The complete interior was very nicely redone. All glass and trim are in excellent condition. The frame and all lower panels are rust, dent, and damage-free. Like all American muscle cars, the seating position is both low and comfortable, helped by an adjustable steering wheel, which makes for a comfortable fit for those of any size. The rear jump seats are usable for children or short trips. The instrument panel bezel, the console trim plate, and the door panels are trimmed in the gold faux engine-turned pattern in excellent good condition. The engine compartment and trunk are likewise nicely restored with correct factory finishes. The trunk liner, carpet, and spare tires are very clean. The engine is clean and properly maintained with factory finishes, preserved engine components, and a correctly labeled engine bay. The 6.6 Liter or 403 cubic inches “K” code V8 fires up instantly and settles down into a low but steady rumble thanks to its dual exhaust. Cooper P235/60 R 15 tires put eight-inches of rubber to the ground and, thanks to a massive front sway bar and smaller rear sway bar, handling it surprisingly well for a late 1970s muscle car. In keeping with the American Muscle Car tradition, it has efficient A/C, power steering and power brakes. It comes with a photo album with fifty-two photos of Burt Reynolds with this car showing both the dashboard top and hood being signed by Burt Reynolds.

As Burt Reynold's health failed, this black/black Trans Am was sold to the current owner at the Carlisle Auto Auction, Carlisle, Pennsylvania, in March of 2015. it’s a correct Special Edition Y82 model with Hurst T-Tops, black with what Pontiac offered as a black deluxe interior, the “Screaming Chicken” hood decal and the torque-monster 6.6-liter engine. The car comes with a photo album with just over fifty photos showing Burt Reynolds signing the hood and dash, a Stetson hat and red jacket worn by and signed by Reynolds, and yes, it comes with the Florida DMV title that verifies that Reynolds was indeed the car’s owner and Harold Murphy the lienholder. Priced to sell at $195,000 or best offer.


​
Click this link to the View Price and More Information.
Last edited by a moderator: Mar 23, 2020
Reactions: Pontiac Trans Am and Knightrider189